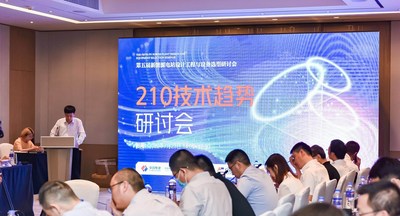 , /PRNewswire/ — At the Fifth PV Power Plant Design and Equipment Selection Seminar and the jointly held “210 Technology Trend Seminar” organized by PVmen and Risen Energy, Risen Energy announced plans to launch their Titan series 600W+PV modules. This joint event, held in Guizhou from was attended by experts and enterprise representatives from the industry and they had a lively discussion on the mature supporting facility of the 210 technology industry chain and research technology. They also had a positive discussion about Risen Energy’s new 600W + modules with high current and low voltage.

This event was highly significant, as with the advent of PV parity, further promoting the reduction in LCOE is becoming the current industry’s developmental direction and consensus. Modules technology innovation continues to accelerate, and so is the rise of large silicon wafers, such as 210. It will push the module power to more than 500W rapidly. High-power modules with large size silicon wafers are becoming the innovation trend of the PV industry.

Vice President of Risen Energy, Dr. Qiang Huang, said, “In the era of parity, the reduction in the LCOE is the core competitiveness. From 400W to 500W and to 600W finally, the rapid increase of the module power reflects the industry’s breakthroughs of the LCOE. Due to the parity, low LCOE and electricity prices are become to the new “14th five-year” topic of the PV industry.

At the meeting, Risen Energy’s senior director of R&D Liu Yafeng, launched the new TITAN series modules — G6. This series continue to use non-destructive cutting, high-density packaging, and MBB technology from the G5 series that were introduced in . It also adopts the 6*10 half-cut design patterns. All these designs increase the module power and reduce the risk of hot spots. Furthermore, the innovative design of low voltage and high power helps greatly reduce the BOS cost.

“Bigger than bigger! High to low!” As Dr. Qiang Huang added, “Reducing the LCOE is the core goal rather than high power, although it will encounter some difficulties before becoming the mainstream in the market.